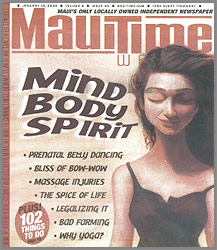 “The body is like a car” he says, “It needs maintenance.

Dennis Prince, proprietor of Island Spice, explains that to be healthy, you have to keep yourself mentally clean and nourished, and that healing is a continuous process. He says every plant has a function, whether it’s antibacterial or diuretic or otherwise, and that you must always live expressing love in order to “stay in the light.”

I have decided to go on a healing journey. And I started this journey while sitting on a stool in a tiny shop at 505 Front St. in Lahaina, prodding Prince—or “Spice,” as he is popularly referred to—for information on his beginnings in the field of alternative medicine.

He was first introduced to his healing knowledge on the Georgian landscape, where his grandparents were farmers and horticulturist and had a wealth of information about plants. His childhood was spent learning about plants and finding that he took to the education easily. He also found that he had a knack for knowing how to use those plants to treat what ails the body.

“I was at a point in life where I had a little place on three acres,” Spice says, “and I could not find a job anywhere, doing nothing. So my friends who knew I had this knowledge plants would come to me and ask me about what herbs to take for this and that. And the information and plants I would give them worked so well, they were so stoked that they wanted to compensate me and would leave me money. That is how this business began for me many years ago.”

Spice also has the gift of being able to “read” the body. People come to him with a general malaise that he can detect as an unbalanced “weight” on the body that accumulates from untreated past occurrences.

Spice says herbs constitute only five to 10 percent of the healing process; it’s your spiritual energy that’s of utmost importance. When he does detect negative energy lingering in the body he applies plant energies, known as “vibrations,” to kick-start you up and start drawing those vibes out.

His father exposed him to spirituality early, and it’s a vital influence on all of his teachings. Spice is able to sense disturbances in your personality, spirituality and health, and can recommend positive changes to your whole being that includes a combination of spiritual exercises, vibrations and herbs. Most people seek counsel from him when they’re fed up with the medical industry and are determined to find a solution to their healthcare problems.

Spice lives up in the mountains of West Maui in a shack he constructed from scraps. Living close to nature is something he feels he must do, as it helps eliminate some of the mental baggage he collects while dealing with folks and their health. He tells me that he now operates primarily on an appointment-only basis for patients so that he can focus on some of his other important tasks this year.

He’ll be tackling a book project, offering his dying art of healing therapies some immortality. He’s also focusing more on his clothing line that has an emphasis in surf apparel, called Island Spice Spiritual Surf Co.

Actually, it’s this new merchandise idea that will be taking front and center as Spice develops a group of products designed to assist the traveling surfer, including an endurance formula, general cleanse, mosquito repelant, sleep aid and immunity formula.

Back at the shop, I look around at the jars of herbs, Bearwood Bark, Wheat Grass, Fenugreek, Oak Wood, as well as the labels on the bottles of vibrations—Tuna Cactus, Pink Hibiscus, Humbleness. I am ready to begin my treatment.

Spice tells me my left side is a bit atrophied by “darkness,” and my left arm is “weighed down.” He lights incense for aromatherapy. He asks if I feel a tightness in my throat. Also, he says I have a nervous energy that travels down my spine. We get to the bottom of this by consulting my astrological chart and what Spice calls “Gods Coctail.”

We find that I have much Scorpio influence that could be creating that “jumping” energy in me. But plenty of Virgo offsets all this with much down-to-earth energy, creating the even keel I am commonly known for.

Nevertheless, I want to be rid of this negativity on the left side so I try several “frequencies” in an original product that Spice has developed base on plant personalities. Each frequency embodies the vibrations and spirit of the plant. These have an immediate calming—then lifting—effect.

To finish it off, he blows on my forehead to “clear out” the bad energy. With my eyes closed I am treated to images of haliconia, night blooming cirrus and swirling colors. And my tension is miraculously released.

I have determined to have this higher vibratory mindset and promise to report back with positive feeling. Easier said than done, as I am released from the herbal cocoon of his office back to the modern vibrations of paint fumes, traffic and work stress.